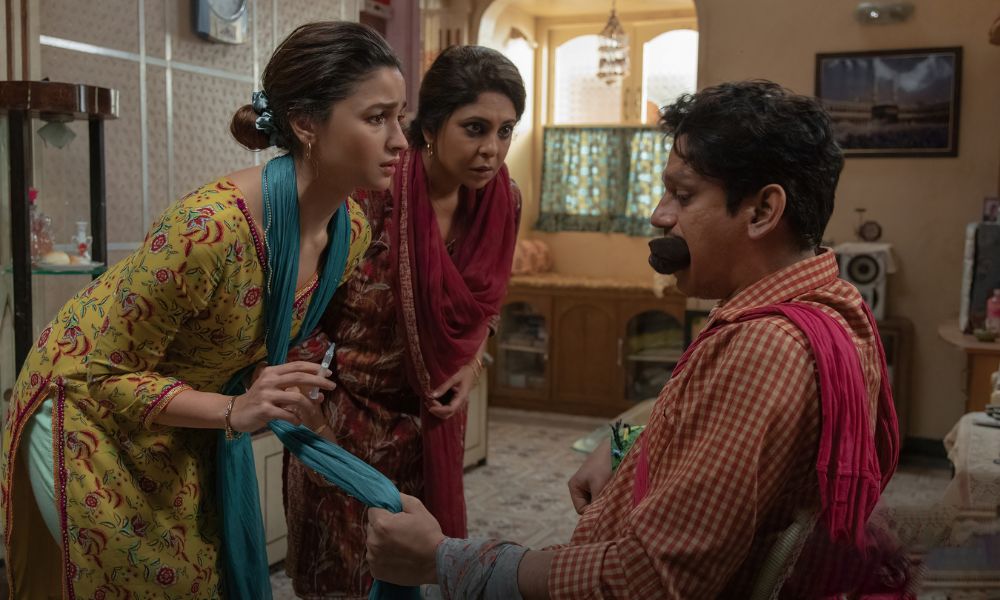 The husband is an alcoholic who has no remorse for assaulting his wife every night, the wife is head over heels in love with him and doesn’t mind cooking breakfast — the staple bun omelet — for him every morning with bruises all over — this may be a common occurrence in many Indian households, but it is rarely discussed as it should. Picking a subject like domestic violence for a dark comedy isn’t ideal, but Darlings, starring Alia Bhatt, Shefali Shah, and Vijay Varma, nails it. It is a quirky (as ironic as it may sound) take on how abuse against women and men is normalized, directed by debutante Jasmeet K Reen. Nothing justifies either of their actions, but it’s interesting to see the story unfold in such a way that it never appears unsettling.

Badrunissa Shaikh aka Badru (Bhatt) falls in love with roadside Romeo Hamza Shaikh (Vijay Varma) and marries him as soon as he gets a government job. Three years later, in life after marriage, we see Bhatt being beaten up every night for a different reason each time. Sometimes it’s a kankar in the food, other times it’s because she attended a colony meeting without her husband’s permission. And another time because he suspects she’s having an affair. The abuse becomes more disturbing and intense with each passing day until one-day Badru decides to stand up and take charge. Darlings then depict how a middle-class mother-daughter duo (Shah and Bhatt), caught in their circumstances, gradually discovers their inner strength to survive in a city like Mumbai, despite all odds.

With a running time of two hours and fourteen minutes, the film is well-paced, with interesting revelations occurring one after the other. Reen’s story, which she co-wrote with Parveez Sheikh, is engrossing and elicits feelings of angst, helplessness, and empathy. More than the story, Vijay Maurya’s (along with Sheikh and Reen) dialogues are impressive and truly fit the film into the dark comedy genre. Some one-liners and comic punches are so subtle that if you’re not paying attention, you’ll have no idea why the person next to you is laughing so hard. Wait for the climax, which is both funny and sad on its right.

Darlings are also filled with stereotypical characters. The scenario is known to a lady who owns a salon on the ground floor, but she would rather discuss it with her clients than take any action. Butcher Kasim Bhai (Rajesh Sharma), a trusted uncle, covers up for the family’s dirty deeds. There’s also Hamza’s devious boss (Kiran Karmarkar), who makes his life a living hell and enjoys meddling in other people’s affairs.

Having said that, the performances in Darlings are outstanding. Bhatt is in top form, with her quirky lines, dialogue delivery, vulnerable expressions, and emotional meltdowns allowing us to connect with her on a deeper level. She reminded me of Gully Boy’s Safeena in some ways. Shah plays her onscreen mother, and she gives a phenomenal performance that is far more restrained than her previous appearances in Humans and Jalsa. Shah is endearing, strong, and provides appropriate support for Bhatt’s story.

Varma is excellent as Hamza and succeeds in making you dislike him. He’s cruel and unreasonable, and his character is written most realistically, in my opinion. Another character to keep an eye out for is Roshan Mathew as Zulfi. He may have some confrontational scenes, but whatever little he gets to do, he makes an impression. I wish there were more scenes with him and that his relationship with Shah and Bhatt was fleshed out more.

Darlings’ strongest selling point is the friendship between Bhatt and Shah. It is a wise decision on the part of the filmmakers to center the film on this mother-daughter relationship rather than the couple’s domestic violence. When the tables are turned and Hamza is the alleged victim at the hands of his merciless wife and her mother, violence against men appears to be a farce. Of course, Badru’s actions are justified because she is filled with vengeance and hatred, but it does call into question the very premise of Darlings. I wouldn’t be surprised if many people criticize Bhatt for agreeing to play a role that appears misandrist, but we have to take everything with a grain of salt.

Janhvi Kapoor is hesitant to discuss what she learned from Sridevi