Astrologer tells Priyanka Chahar Choudhary to get over Ankit Gupta because he can't see her future with him. 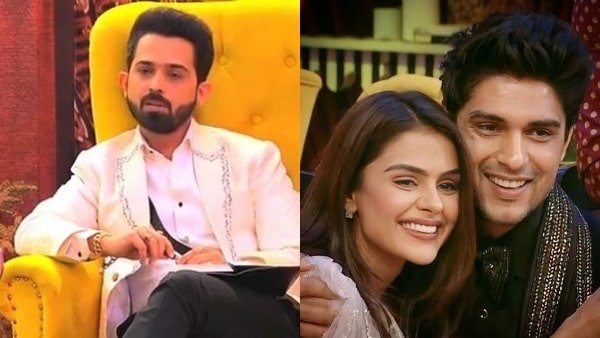 The most recent episode of Bigg Boss 16 featured astrologer and visionary mentor Saurish Sharma advising the contestants on their performance in the house and predicting their futures. He stated, while speaking with Priyanka Chahar Choudhary, “Clearly, based on your aura, nothing can occur between you and Ankit Gupta. You guys have a bleak future. The future is uncertain. You should not let this distract you from your game and trophy. When you leave the house, some truly wonderful things will be waiting for you “. The astrologer advised Tina Datta to be carefree if she desired to produce her next blockbuster film. In addition, he informed him that her attitude is the obstacle to her career advancement.

He told Archana Gautam that she possesses ‘Kaali Zubaan’ and that her words had manifested events on the show. He backed up her claim by citing her feelings regarding Ankit’s departure from the show and the dissolution of the mandali. He also spoke with Shiv Thakare, telling him that he will be more successful once he is married. Then, he disclosed that he and his ex-girlfriend Veena Jagtap broke up because Shiv’s mother disapproved of their relationship.

Priyanka Chahar Choudhary & Ankit Gupta’s bond
Bigg Boss sixteen competitors Priyanka Chahar Choudhary and Ankit Gupta had a very close relationship both in and out of the home. They entered the show together and played together during Ankit’s stay in the house. While the pair refers to themselves as “just friends,” viewers saw more than that. In the initial episodes, Priyanka revealed that she had feelings for Ankit, but he does not reciprocate her feelings.

Ankit, on the other hand, made it clear that he does not want a future because he does not believe in the intuition of marriage. However, Priyanka realised that their relationship would not succeed. Priyanka was devastated by Ankit’s elimination and stated that she was not prepared to live in the Big Brother house without him. After leaving the house, Ankit spoke to the media about his relationship with Priyanka and stated that nothing can happen between them because he has no desire for a future. Nevertheless, he acknowledged that there is mutual affection because they spent considerable time together.

When the astrologer discusses Sumbul Touqeer’s struggles, he is met with disbelief.
The astrologer Saurish Sharma told Sumbul Touqeer that the actress experienced a great deal at a very young age. He disclosed that she was distressed when her parents divorced and that she has not spoken to her mother since. He suggested she speak with her mother in order to achieve success. He also disclosed that Sumbul was involved in a legal dispute. He then indirectly ridicules MC Stan for only discussing his own struggles while ignoring those of his friend Sumbul.

Shalin Bhanot loses his composure and hits the wall with his head. “koi baat karne wala nahi hai,” it says